For as long as I can remember I have been trying to figure out how the world works. I started with what seemed obvious to me at the time; I looked into things like gravity, optics, how computers worked, and various other topics. As much information as was available at the time something very slowly came into focus: I suck at this task. Just like you.

The problem, however, is not you nor I per say. The problem is something Charles Sanders Peirce dubbed the phaneron. The gist here is that while we attempt to unravel the clues we glean from the information we receive it is all filtered through us. For example, although we now know the brain to do most of the information processing for our bodies, no human perceives vision without a photon first hitting the retina. There are so many steps throughout the process of vision, each with their own quirks, that there is no sure way to know the final result comes anywhere close to resembling the original phenomena. This even assumes the brain can be “trusted” to do what we expect it to do in the first place. For these reasons– and others– is why we conduct blind experiments, after all. This thought process is strange in that it implies that the brain and “we” are somehow separated but I am not aiming to write an academic dissertation here so deal with it, jerk.

As of late a lot of my focus has changed from what things and machines can I figure out, experiment with, build, and control to one of understanding some near analogs:

I am not necessarily going to answer these questions but am going to attempt to start on that path. It might first be important to break down the basic human components involved. In other words, what tools do we have that play a role in our understanding of gravity, optics, computers, and bacon cheeseburgers?

Cameras as we know them today capture frames. That is, a point-and-shoot camera captures a single image. Motion cameras capture multiple frames but still at least one entire image at any single instance in time. This gives us the most information possible encompassing about everything visual within range: A complete “picture”. Even the earliest of practical cameras had a resolution capable of reproducing a level of detail that allowed a human to easily make out details at a distance. 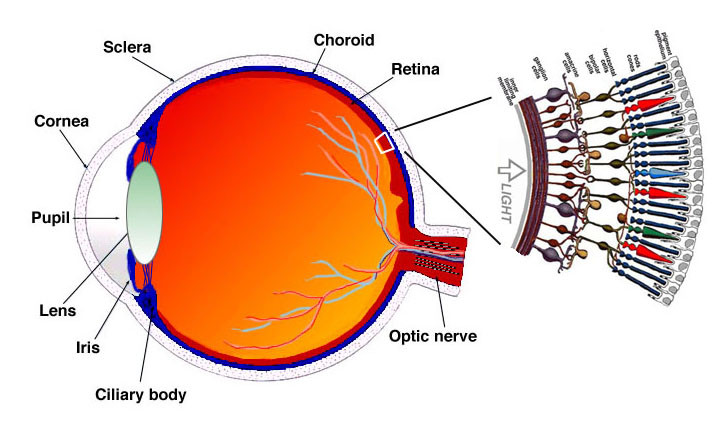 The eye, on the other hand, does not work this way. Most of the information gathered is discarded by the brain depending on a humans object of focus and thus never makes it into memory. To compound this only a small portion of the back of the eye (~2º at a ~7 megapixels equivalent) is capable of any significant level of detail which does not even take into account the blind spots where the fovea or where the optical nerve meets the retina. In order to compensation the eye must rapidly dart around to build a “complete” image of the scene. Given the time this takes, no matter how quick, this makes it impossible to accurately track a sufficiently fast moving object as it once appeared.

Peripheral vision is even more limited. Unable to pick out even the largest of details its role is virtually solely limited to detecting motion from one moment to the next. Aside from notifying the brain the retina needs to be moved into place to view a new potential object of interest it can barley make out anything that would be deemed useful as a “frame.” If you place both of your thumbs, side-by-side, as far as you can in front of you then you will have a rough idea of everything not in your peripheral vision.

Oh, also right now you can not see your own nose despite it always being within your field of vision. Oh, wait… there it is.

The sheer amount of visual information that is right in front of you that you are aware of it astounding to me. Hey, it could be worse. You could have Anton-Babinski Syndrome.

Auditory
What is your favorite kind of music? What do the people around you sound like? How does a jack hammer differ from either of these two things?

It just does, right? I mean, music is pleasant and people can talk, neither of which I have ever heard from heavy construction machinery. The fact is our brains are very good at picking out patterns in noise even when there is no pattern to be found. Saying the same word over and over causes your sense of the word to slowly dissipate while listening to linear static occasionally causes things like animal sounds to magically appear.

Touch
When I was a child in childrens school I and the other children were taught touch is one of the basic senses (children). This is, of course, a drastic over simplification for the sake of the intended audience. Touch, as we traditionally think of it, is not a single sensation: there are at least hot, cold, pressure, and pain in addition to the traditional five senses.

Events starting or ending (say, touch) are difficult for a human to detect (we more commonly detect the continuation of the stimuli). For example, unknowingly touching a hot surface will instantly start destroying cells and our reaction to said stimuli (say, removing our hand from the hot surface) will often occur instantly. Since we were unaware of being burnt during this period it can not be said we “knew” anything about. Instead the reaction originates in and around the spinal column. Is your body preforming actions without your consent? You bet. In addition hot and cold are often mixed up by our senses. Imagine the sensation of burning while exposed to something extremely cold.

Here is a fun experiment:

Did it feel like you touched the left side of your tongue each time? How could this be since the second time you were actually touching the right side? Our perception (or sense of proprioception, in this case) can very easily be fooled. In other words how could we ever surely know where we are in space?

This can pretty easily be illiterate with the following example: Imagine you are considering making a purchase of $10. Would a $5 off coupon help you make up your mind? Now imagine, instead, that purchase price was $1,000. What are the chances of a $5 off coupon effecting your decision to pull the trigger now? If you are like me your gut says $5 was more valuable in the first scenario. However saving $5 is saving $5 no matter how much the final total comes to. The evidence suggests we were born to work in gradations leaving us unprepared to make logical decisions in the real world in which we live.

The postulates we make, live our lives by, and blindingly accept as fact might never have been so.

Time and Space
Probably my personal favorite in our list, this one screws with peoples heads. Since this topic is so huge I am only going to propose one of Einsteins simple thought experiments and let you investigate the implications. 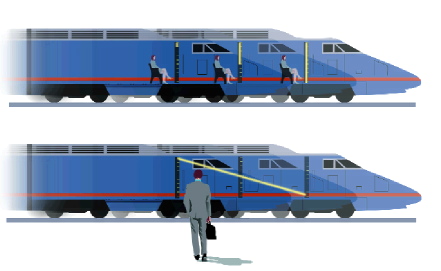 Imagine two people, one riding on a train (Person A) and the other standing on the tracks (Person B) where the train is passing by. Person A bounces a ball hard enough so that, after bouncing off the floor, it travels straight up and hits the ceiling. Therefore Person A witnessed the ball bounce X distance at Y speed. However Person B, since the train is moving, witnesses the same event (the ball bouncing from floor to ceiling) as traveling the same speed but within a larger distance within the same time period. How could the same ball travel the same speed but cover a larger distance in the same amount of time? Neither observation is incorrect but they seem contradictory. A variation of the same thought experiment can also demonstrate space– and thus matter– itself is not fixed but changes based on the observer.

Of the many points illustrated in this example one of the take-aways is that it is not possible to know if you are seeing what someone else is seeing. All the information filtered through your phaneron may, in fact, be feeding you “false” information which you have no reason to believe is not what occurred. Causality even comes into question.

Lack of Senses
What about everything else? Are there things out there invisible to all of our senses? Some birds have been show to navigate by magnetism. Insects can see “colors” outside the spectrum of light we can perceive. Between naturally occurring and man-made radio signals we are bombarded 24/7 by exploding stars and mobile phone calls. None of these unperceived occurrences caused us any sensory input giving us an even less complete picture of our surroundings than we thought we had before we even realized our own shortcomings. Does the light in the freezer even go off when you close the door? Do other people stop existing if you close your eyes?

Injury
Your brain has a lot of information coming at it all day long. Of course this sole aggregator of the sense needs to take some short cuts in order to deal with it all.

What happens when this central hub becomes damaged? Would you even know it? Do all people with schizophrenic hallucinations realize the things they feel, see, or hear are not there? How could you tell that perceived voices coming from your left are coming from your left at all? Are the real things in your environment real things? Are you even sure you are hearing everything there is to hear?

Check out the cases of Phineas Gage, Henry Molaison, and the book The Man Who Mistook His Wife for a Hat by Oliver Sacks.

Philosophy
This deserves much more written about it than I will here but a few things to look up:

So what does this all mean? Does it render the world or our existence meaningless? Yes. No. Irrelevant. Not applicable. If all this information is new to you and you now feel somehow differently about some subject remember that the only thing that has changed is “you”. Personally I suggest trying to stop thinking in yes/no terms; accept you are one with everything in the same sense that there is no difference between yourself, words, the wind, ideas, right, wrong, happiness, or emptiness.

By the way, if anyone wants to base a magic show on this article I want free tickets.

3 thoughts on “You Suck: The World We Knew”