Ah, Simple Tanks. My pet project I always get so excited about and never finish (or never really start). Every time I hit a tiny snag I have not encounter before I stop. This time it is uniquely identifying objects over the network with each player. Big problem no one has ever tackled before? Hardly. I also came across a problem I have already solved– at least in theory which is good enough for me right now– and I have yet to implement that. On top of that it would have far reaching applications for me if I just sat down and did some of these networking things.

Every now and again one comes across something that makes them laugh so hard they hurt. Often they keep looking at it over the course of weeks (at least I know I do). A recent Penny-Arcade strip had this effect on me. 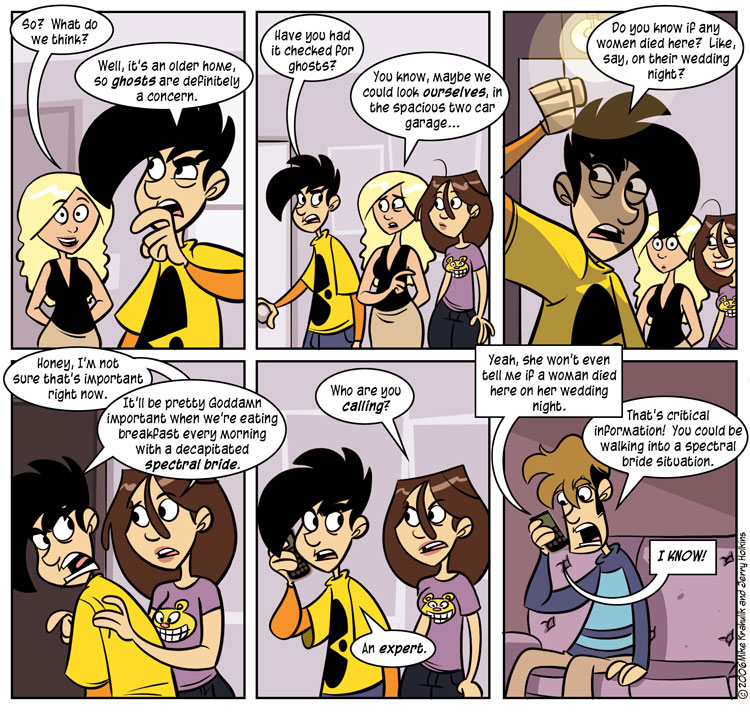 The nuance in the faces of the third panel are priceless (or as much of a nuance as you can find in a mono-colored web comic). I have yet to buy a house and these might be things I need to be aware of. Also ancient Indian burial grounds.

I will once again be GM’ing another Unknown Armies game. This time at Parallax LAN Center in Mineola. We played a (very) short game last night and everyone really enjoyed it so we are attempting to setup a weekly thing. As much as I love my Dungeons and Dragons group the game is way to complex for its own good. Unknown Armies gives you all the tools you need to create an alive, often crafty world without the weight of adding 16 different kinds of modifiers to each roll (unless you want to, of course).

I am still not sure if I want to create a new scenario or go with one of my existing ones. Normally I would create a new one for each group but none of my other ones got very far and I want to see where they can go. I could wing it like I have done with a number of one-shots– not sure how well that would work out in the long run not to mention the coolest of recurring themes almost out of the picture due to my horrible memory. There is the All Alone-themed one I modeled after System Shock 2 complete with Shodan-esk final boss battle and mutilated monkeys. I have my Stuck-in-an-Evil-Mob-Boss-Controlled Town game where players walk a thin line between carrying out orders or being killed. Also a few I have not put much work into but the general idea is there.

What to do what to do? Either way I will be meeting with the owner of Parallax to discuss how this is going to work. I hope to see continued interest as I love doing this.

This– at least in my mind– touches on the “why hire local [insert job title here] when I can out-source to [somewhere] for a fraction of the price“? Just a thought…

There are very, very impressive demos over at http://graphics.stanford.edu/%7Efedkiw/.

A few say we could see this in the next gen console hardware. Of course PCs will be doing it a lot sooner.